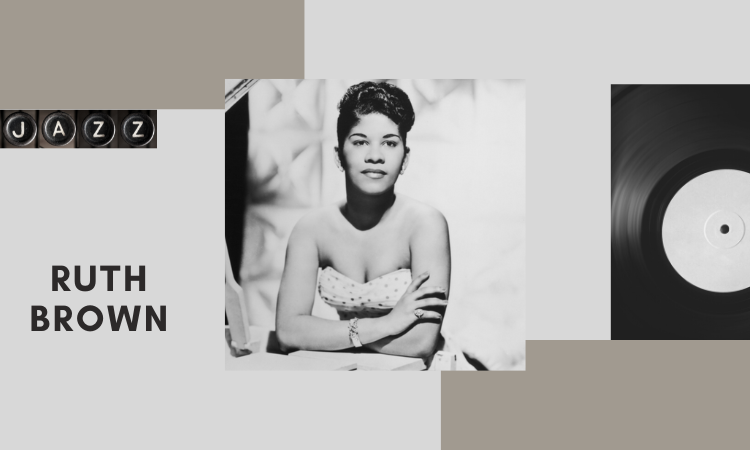 Born Ruth Alston Weston in Portsmouth, Virginia, she attended I. C. Norcom High School, a historically black high school. Brown’s father was a dockhand who directed the local church choir, but the young Ruth showed more of an interest in singing at USO shows and nightclubs. She was inspired by Sarah Vaughan, Billie Holiday and Dinah Washington. In 1945, Brown ran away from her home in Portsmouth along with trumpeter, Jimmy Brown, whom she soon married, to sing in bars and clubs.

Brown was unable to audition as planned because of a serious car accident that resulted in a nine-month hospital stay. In 1948, Ertegün and Abramson drove to Washington, D.C., from New York City to hear her sing in the club. Although her repertoire was mostly popular ballads, Ertegün convinced her to switch to rhythm and blues. His productions for her retained her “pop” style, with clean, fresh arrangements, and the spot on the beat with little of the usual blues singer’s embroidery.

In her first audition, in 1949, she sang “So Long,” which ended up becoming a hit. This was followed by “Teardrops from My Eyes” in 1950. Written by Rudy Toombs, it was the first upbeat major hit for Ruth Brown, establishing her as an important figure in R&B. Recorded for Atlantic Records in New York City in September 1950, and released in October, it was on Billboard’s List of number-one R&B hits (United States) for 11 weeks. The huge hit earned her the nickname “Miss Rhythm” and within a few months, Ruth Brown became the acknowledged queen of R&B.

During the 1960s, Brown faded from public view to becoming a housewife and mother, and only returned to music in 1975 at the urging of Redd Foxx, followed by a series of comedic acting gigs, including a role in the sitcom Hello, Larry and the John Waters film Hairspray as local DJ Motormouth Maybelle, as well as Broadway appearances in Amen Corner and Black and Blue, which earned her a Tony Award as “Best Female Star of a Musical” for her performance and a Grammy award as Best Female Jazz Artist for her album Blues on Broadway, featuring hits from the show.

Brown’s fight for musicians’ rights and royalties in 1987 led to the founding of the Rhythm and Blues Foundation. She was inducted as a Pioneer Award recipient in its first year, 1989. In 1993, she was inducted into the Rock and Roll Hall of Fame, as “The Queen Mother of the Blues”.

She has become an iconic symbol to many black women for later generations, where she is also a favorite artist and inspiration for later blues artists such as Bonnie Raitt. Brown recorded and sang along with fellow rhythm and blues performer Charles Brown, a member of the Rock and Roll Hall of Fame, and toured with Raitt on Raitt’s tour in the late 1990s, “Road Tested”. Her 1995 autobiography, Miss Rhythm, won the Gleason Award for music journalism. She was nominated for another Grammy in the Traditional Blues category for her 1997 album R+B=Ruth Brown.